East Central College sophomore defender, Darren Hamilton (Newcastle, England) has accepted a scholarship to pursue his academic and athletic career playing soccer for the Hartwick College Hawks in Oneonta, New York.  The storied program has been one of the most successful in NCAA soccer history. Founded in 1956, it was one of the original college soccer programs and has been to the NCAA Tournament 24 times along with 6 Final Four appearances. Hartwick captured the coveted NCAA DI National Championship in 1977.

The Hawks will be getting one of the Falcons most recognized defenders as Hamilton was named a 2015 NJCAA 3rd Team All-American his freshman year along with garnering MCCAC 1st Team All-Conference and Region 16 1st Team honors. He started every game his freshman year and during his sophomore year suffered a setback with a stress fracture. As the anchor to the defense, the Falcons post season hopes were dashed as Hamilton unable to play in the NJCAA Region 16 Tournament.

Hamilton plans to study business with emphasis sport management while attending Hartwick College. The English native is excited about the opportunity after looking at four other schools at the NCAA DI level. 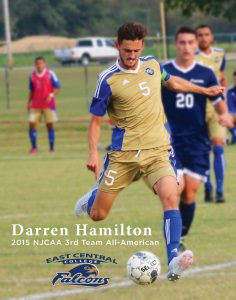