Falcons Chop Down Loggers in 4-1 Victory

As the Falcons (3-3-1) traveled to Springfield, IL to play Lincoln Land Community College, the team bus faced a number of construction detours, but this didn’t put a damper on the offensive output. ECC was able to chop down the Loggers 4-1 on a second half goal output. ECC was knocking on the door all day taking a barrage of 31 shots on goal for a season high. The Falcons were kept at bay in the first 45 minutes as Leo Sowa scored the team’s only first half goal to give ECC a 1-0 lead at half time.

The second half started with more shots and saves from the Lincoln Land goalkeeper. The Falcons sputtered as LLCC scored on one of their only three shots on goal to tie the score 1-1. After this goal, the game opened up and so did the scoring. Stephen Akot scored the second goal for his fifth of the season and then Arman Kovac got into the scoring as he assisted Sowa’s second goal of the match and added his own. All three goals came within 5 minutes of each other in the 74, 78 and 79 minute of the game. 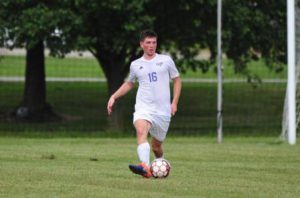