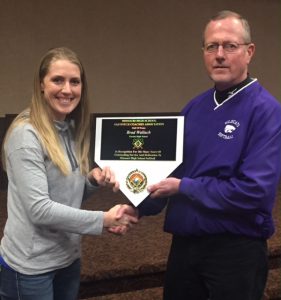 East Central College Head Softball Coach Brad Wallach was just inducted into the Missouri High School Fastpitch Coaches Association Hall of Fame for 2017. Coach Wallach was presented with the award at the annual MHSFCA Coaches Clinic held in Columbia, Missouri on February 4, 2017. The award was presented to him by his daughter Melanie (Wallach) Rouggly.

Coach Wallach’s recent success includes his time as the skipper for the Falcons, the team has collected over 200 victories and a number of his players have received honors. The team has had over 20 NJCAA recognized student athletes for academic excellence as well as over 30 all-region and all-conference selections.  Coach Wallach has won four NJCAA Region 16 DII Championships, two NJCAA District Championships, and made two trips to the national tournament.

A successful interscholastic coach and teacher at Eureka High School, Coach Wallach’s tenure spanned over 27 years, where he won over 350 games as head softball coach along with seven conference and three district titles. During his 24 year tenure at the helm of the Wildcat softball program he had 32 St. Louis Post-Dispatch All-Metro selections, two St. Louis All-Metro Players of the Year, one Missouri Gatorade Player of the Year and 15 All-State players. Coach Wallach was named Coach of the Year in the Suburban South Conference seven times. Under his guidance, Eureka High School softball teams finished 3rd and 4th in state.

Coach Wallach coached his own daughter, Melanie, who was named St. Louis Metro Player of the Year in 1999 at Eureka High School. She played collegiately at Kansas University and has since followed in her father’s footsteps as a high school softball coach. Her team, Jefferson R-7 High School, finished 3rd in the Missouri 3A State Championship in 2016.