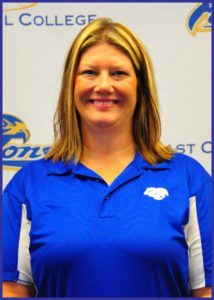 After spending time as a player and assistant Coach at Indian Hills-Ottumwa, Iowa she took the head job at Des Moines Area Community College for two years and then moved to the University of Sioux Falls in South Dakota as head coach for six more years.  The Cougars experienced success on the court and in the classroom under her tutelage. During her last year at Sioux Falls the Cougars finished 21-19.

Coach Mathes-Peters lives in Washington, MO with her husband Tim and their children: Blake and fraternal twins Bradyn and MacKenzie.