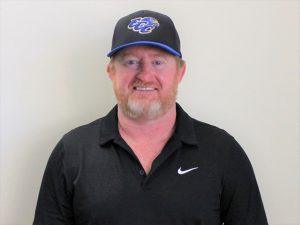 East Central College is excited to announce the hiring of new head baseball coach, Mr. Brandon Rains, for the newly reinstated men’s baseball program in the 2021-22 academic year. Coach Rains will be the new skipper for Falcons as they take to the diamond for the first time since the 2000 season. He will start the position by recruiting an entire squad for the upcoming year. The ECC Athletic Department and Foundation will be raising funds to renovate the baseball field over the course of the winter of 2020 to have the field playable in the fall of 2021.

Coach Rains took over head coaching duties at NJCAA DIII Brookhaven College in Dallas, Texas in fall of 2010. During the staff’s first season the Bears cracked the top 10 in the NJCAA polls for the first time in school history coming in at number 9. Over the next nine seasons, Brookhaven remained in the NJCAA top 10 polls every year with the exception of one. The Bears were ranked 3rd in the nation to start the 2020 season. During Coach Rains’ 10 seasons at Brookhaven College the Bears won Metro Athletic Conference championships in 2013, 2014, 2017, and 2018. In addition to the multiple conference championships, Coach Rains teams advanced to the District C regional Championship game in 2013, 2016, 2017, 2018, and 2019. The Brookhaven College Bears were able to win that tournament in 2013 and 2019 and advance to the NJCAA World Series where they finished in the Final Four in 2013 and a third-place finish in 2019. The Bears set school records for wins in 2017 with 35 and topped that with 42 in 2019. Brookhaven College had 7 straight 30 plus win seasons dating back to 2013.

While at Brookhaven Coach Rains recruited and coached over 60 players with all conference or other post season awards including 6 NJCAA All Americans. The Bears also had the 2019 NJCAA DIII National Player of the Year Ruben Alcala from El Paso, Texas. One of the programs biggest accomplishments was that the program sent over 60 players to NCAA D I and D II programs across the country, including 6th round draft pick Tampa Bay Rays and All- Big 12 performer Mac James from the University of Oklahoma.

A native of Rotan, Texas, Rains came to Brookhaven College after spending 8 consecutive winning seasons as the lead assistant coach and recruiting coordinator at the University of Texas at Dallas. While at UT-Dallas Coach Rains helped lead the Comets to the postseason in 7 of 8 seasons including an NCAA Regional finals appearance in 2007.  Throughout the 2009 season, the Comets led the nation in home runs with 83 in only 46 games. As recruiting coordinator at UT-Dallas the Comets fielded 59 all-conference players and 4 NCAA DIII All Americans.

Coach Rains began his college baseball coaching career at the University of Saint Mary (NAIA) in Leavenworth, Kansas from 2000-2002. While at Saint Mary, Coach Rains was the assistant baseball coach and assistant football coach. In 2002, he was named the head coach and guided the Spires to the KCAC post season tournament for the second year in a row.

As a member of the American Baseball Coaches Association for the past 20 years, Coach Rains has been selected as Coach of the Year in 2013, 2017, 2018, 2019 and was part of the coaching staff of the Texas New Mexico Junior College Coaches Association All Star Game in 2013 and 2019. In addition to his 20 seasons of coaching college baseball, Coach Rains has coached summer travel teams in Italy, Amsterdam, Australia, Aruba, and the Dominican Republic.