The Falcons are sending one of their finest to the next level as Gary Dunne (Dublin, Ireland) transfers to his four-year institution this fall. A two-year captain and starter, Gary hopes to continue his academic and athletic career at King University in Bristol, TN. The KU Tornado compete in the Conference Carolinas at the NCAA Division II level. The team is hoping to improve on a conference semifinal appearance from the previous season. Most of the conference schools are located in North Carolina, South Carolina and Tennessee.

Dunne, was a 2nd Team All-Region selection his freshman year, leading a stingy defense to a 10-5-1 record. His sophomore year looked to be even more promising with a seasoned back line, but Gary only made it through half of the season with injury. “If Gary would have played the entire season, we would have definitely won 3 more games with his ability to organize the back line and keep the opponent’s strikers from scoring,” states Jay Mehrhoff, ECC Head Coach 2019.

He completed his Associate of Arts degree and will be named an NJCAA Academic All-American based on his final GPA. A strong student in the classroom, Gary will be successful in life after his playing career. 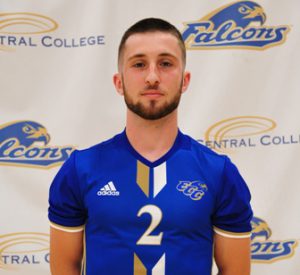