The East Central Falcons, 5-1, were able to put together an acceptable offensive output by beating Scott County 7-0 at home. The scoring was lead off by Archibald Darko-Boateng who netted the first goal on a penalty kick and added another as well as three assists. Two of his assists were goals by Umoh Ufot who netted his 9th and 10th goals of the season. Jacob Moore, Brian Cabraley and Brian Zapata also found the back of the net for ECC.  Magnus Andersen had two assists in the match. A hot afternoon had the offense stalling at times, but defensively the Falcons led by Connor Bandre and Moises Aldana in goal to preserve the shutout. Darren Hamilton, Brent Lampen, Kai Bucceiro and Travis Knierem played well in the back to contribute to the clean sheet. 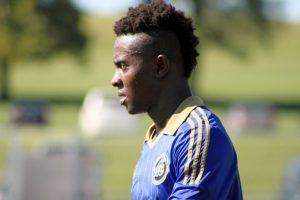