ECC Battles For Win Over MCCKC

The Falcons, now 9-5, were able knock Metropolitan Community College- Kansas City by a score 2-1 on cool October evening on the western side of the state. The victory was only the second region win of the season, but moved ECC up in the rankings for a more favorable seed in the post season. Sophomore captain Joel Konteh led the Falcons with a goal and an assist. He was able to put in the early goal on an assist from Arman Kovac. The Falcons were pressured throughout the match and Leonard Sowa added the eventual game winner on an assist from Joel Konteh. ECC conceded a late goal with six minutes remaining to hold on for the 2-1 victory.

The last game of the season will have the Falcons facing the Hawks of Rockhurst University. ECC will try to make it to the double digit win mark on the season against Rockhurst’s JV squad in Kansas City for the seventh year in a row. 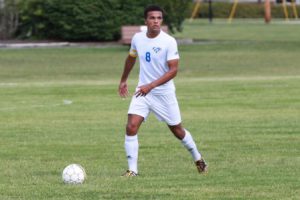