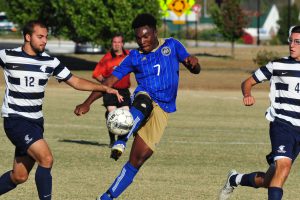 The Falcons started the season with an exclamation point as the won their first game 11-1 over MacMurray College. East Central College had a limited line-up going into the match with a couple of key injuries to starters and a few sick players as well. The Falcons decided it was time to take care of business by finding the net often.  A couple of quick goals set the pace and the Falcons never looked back. Umoh Ufot led the team with four tallies and Jacob Moore added a hat trick of his own. Zach Druhe, Brian Cabraley, Magnus Anderson and Brian Zapata rounded out the scoring with one each from the quartet. Connor Bandre and Moises Aldana shared time in the nets letting only one get by in the match.  The Falcons are ready to get NJCAA Region 16 and MCCAC Conference play started with a match-up against the newly re-instated program from State Fair Community College.