East Central College, now 3-1, raised their level of play to knock off conference and region rival St. Charles Community College by a score of 3-1. A solid game all around had ECC on top with a second half goal by Umoh Ufot, who is now #4 in NJCAA in points with 6 goals and 5 assists on the young season. Chukwujindu Isreal Bolinarwa was credited with the assist on the goal. The Cougars were able to tie the score at 1-1 on an own goal by the Falcons, but Jacob Moore struck quickly thereafter to net the eventual game winner on an assist from Umoh Ufot. Brian Cabraley finished another converted penalty to complete the scoring at 3-1. 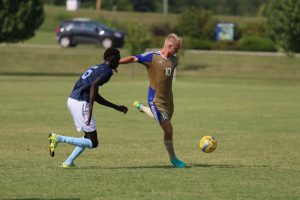