A large crowd gathered to “Flank the Field” as the weather broke and Falcons took to the pitch yesterday. Despite rain in the morning hours, the field was relatively dry and the Falcons faced MCC-Blue River in an NJCAA Region 16 match-up resulting in 2-0 victory. ECC struck first on a penalty kick converted by Magnus Andersen in the third minute of the game. As the game progressed the crowd intensified and the Falcons amped up their game in the second half. ECC had plenty of chances hit the hardware of the Trailblazers goal as three shots pinged off the uprights and just ricocheted wide.

As the attacks kept coming for the Falcons, Juan Bolivar played a through ball into the penalty box and ECC took advantage of a miscommunication with the Blue River defender and goalkeeper as Tanner Harris pressured the ball. Then Andersen motored after the loose ball and tucked it into the net for his second goal of the match. The first was Andersen’s third game winning goal of the season and the second was his eighth goal on the season. Lewis Brass and Moises Aldana combined for the shutout in the nets for the Falcons. 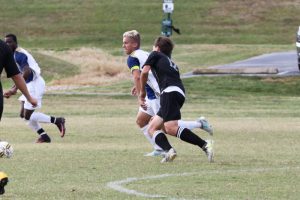