The East Central College Falcons 15-9 were able to knock off the Cottey College Comets in an NJCAA Region match-up at home. A scoreline of 25-21, 29-27, 25-13 had the Falcons battling to win each set from a much improved Cottey squad. A couple of big performances came offensively from freshman Molly Kraus who was swinging well from the outside hitter position with some booming kills against the Comets. Freshman Lydia Klenke came through for the Falcons with spectacular jump serve aces for ECC. The victory in three straights sets was important for seeding purposes in the post season which is right around the corner.

ECC faces Northeastern Oklahoma A&M next for their last regular season home game and “Sophomore Day” at the Donald Shook Student Center at East Central College. The Falcons are looking to improve their stock for post season. 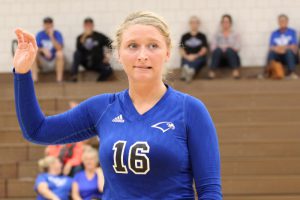