The Falcons, now 17-3 on the season, were able to make quick work of the Culver Stockton JV Wildcats with a double header sweep by scores of 9-1 and 14-4. As ECC trounced the Wildcats, Makala Trail was able to add to her season win total by notching the victory throwing from the circle and registering four strikeouts. Jensen Crenshaw went 3 for 4 with one double, one RBI and two runs scored. Eden Henry almost matched Crenshaw’s totals with exact stat numbers but with one less RBI.

A power surge in the second slate occurred as the Falcons started belting back to back hits along with some fortunate walks by the Culver Stockton pitchers. Samantha White and Eden Henry had two hits each. White was able to drive in three runs in the game. Alayna Abney also collected two RBI on one hit. Abby Ray was the starter and collected her sixth win of the season and struck out nine. 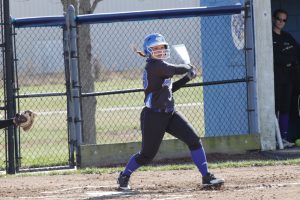 Samantha White at the Dish