The Falcons improved to 2-1 on the season with a four-set victory over the Missouri Baptist University JV Spartans last night in St. Louis. East Central College dropped the first set and then came charging back in the next three sets to finish strong with a score line of 24-26, 25-21, 25-21, 25-18.

An offensive push was led by Leinata Leakehe and Grace Struttmann who both collected double digit kills in the set with 14 and 10 respectively. Alyce Koch, Kilisitina Lutui and Macey Morehead all had 6 + kills in the match as well.  Maranntha Holliman was the catalyst to the attack by adding 31 assists.

ECC has been looking for someone to step up on the defensive side and there was trio of Falcons who were able to add digs; including 24 from Trinity Clark and 17 each from both Olivia Spanley and Leinata Leakehe.

A busy schedule next week has ECC playing four matches in four days next week with STLCC, MSU-West Plains, Lewis & Clark and Missouri Baptist all coming to face the Falcons in the Shook Center next Wednesday through Saturday. 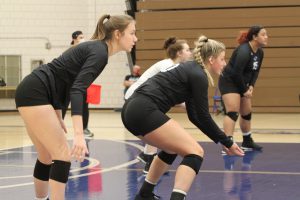