Sophomore Day 2021 for the East Central College Volleyball Falcons (6-3) was unique. First, having parents come to the game was a bonus as this was the first home match with fans for the 2020-21 season. Second, a big Missouri Community College Athletic Conference match-up against Jefferson College with a crowd had the Falcons performing at a top level. ECC took the lead in the beginning two sets but couldn’t manage to hold on, eventually losing the match in three sets 25-19, 25-21, 25-20.

Ironically, it was some of the freshmen that had the better day as Leinata Leakehe and Alyce Koch registered 7 and 6 kills respectively. A tough game defensively had ECC on their heels most of the match as Trinity Clark and Maranntha Hollimann were two of the bright spots defensively.

The match concluded with the Falcons giving their best effort and very generous support of the sophomores from their freshmen teammates. The freshmen and their mothers from the Utah- Tongan contingent made incredible flower and candy leis for the sophomores and the coaches. 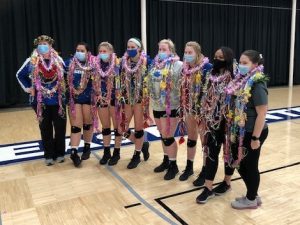