ECC sophomore catcher, Jensen Crenshaw recently signed to play softball for the University of St. Francis in Joliet, IL for her junior year. Crenshaw had a very successful freshman season for East Central College.  Offensively, she led the Falcons with 49 runs scored and 20 stolen bases.  She was 2nd in hits with 61 and 2nd with a .401 batting average.  She also had 6 doubles, 5 homeruns and 23 RBI.  Crenshaw was named 1st Team NJCAA All-Region 16 and 1st Team All-Conference Missouri Community College Athletic Conference in her first collegiate season.  She was also named an NJCAA Second Team Academic Student Athlete and received academic honors from the MCCAC and Region 16.

After her sophomore season as a Falcon, Crenshaw will transfer to the University of St. Francis. The Fighting Saints are coming off a successful season with a record of 43-7 setting a school record with a winning .860 percentage.  They finished 9th in the NAIA National Tournament and were ranked 12th in the final NAIA Poll.  Coach Wallach stated, “The St. Francis coaches are looking to replace their graduating catcher with someone who can make an immediate impact.  That’s why they targeted Jensen.” 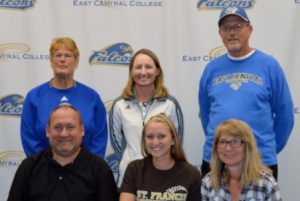