Starting the season 4-0 may have something to do with talent and team chemistry, but the Falcons also have a different mental approach to the game from last year’s team. As the Falcons swept the Missouri Valley Vikings JV squad, they were able to overcome some adversity trailing 1-0 in the second game for a double header sweep by scores of 5-0 and 6-1. The first game had ECC leading from start to finish, but not until 5th inning did the Falcons open the game up. Eden Henry led of the scoring in the 1st by collecting a two run double. She then put an exclamation point on the game as she hit a two run homer in the 5th inning. Henry also led the Falcons with seven scoreless innings pitched. The defense was superb in both games not committing any errors.

The second game had a great outcome despite trailing 1-0 early in the game. Jensen Crenshaw ended up with the game winning RBI as she belted a two run homer in the 3rd inning to elevate the Falcons 2-1. ECC kept tacking on runs as Megan Micke hit a solo home run.  Jamie Kluba, Sam White and Megan Micke all collected hits to drive in the last three runs. Abigail Ray got her first collegiate win going the distance pitching with two strikeouts.  Coach Wallach was very pleased with the team’s performance and hopes the team continues to perform at an optimal level. 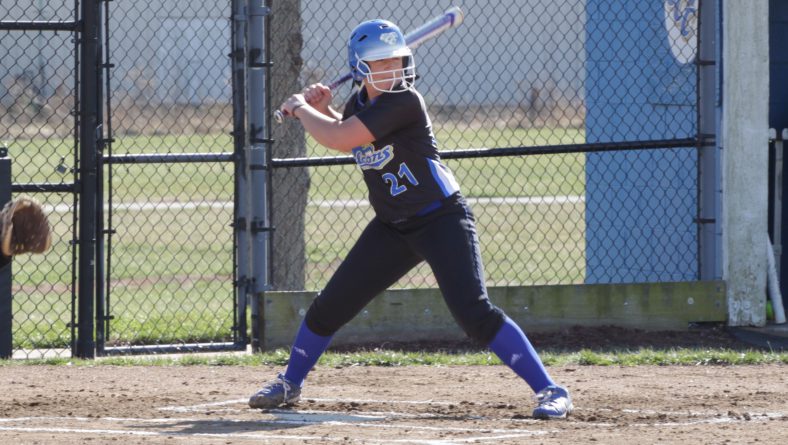 Eden Henry at the Plate