Playing on a rain soaked, soggy surface didn’t slow down the Falcons as they were able to conquer the Northeastern Oklahoma A&M Norse on Sunday by a score of 3-0. The last regular season home match found the Falcons on top early as they scored in the first 37 seconds of the game. Magnus Andersen put on a dazzling display of dribbling after winning a tackle in the midfield. He broke down the Norse defense quickly and penetrated into the box to lay off a pass to Ralph Joseph for his team leading 15th goal of the season. The Falcons tried to regain their footing throughout the first half, but fell short from finding the back of the net.

A second half possession dominance had ECC in the NEO A&M portion of the field most of remaining time in the match. Flavian Hunter, Tanner Harris, Rudy Gonzalez and Tyler Newbold were able to win a number of 50/50 balls to pin NEO in their end. Juan Bolivar went to work offensively as he scored the second goal of the match and Ralph Joseph connected on his 16th goal of the season to finish of the scoring. Moises Aldana was able to get his first solo shutout of the season in the nets for the Falcons. The wet field hindered play throughout the match, but the Falcons were able to string some nice passes together despite the conditions to prevail with the win and end the regular season 12-5-1. This twelfth victory ties the #7 highest win total for a season in the program’s thirty-three-year history. 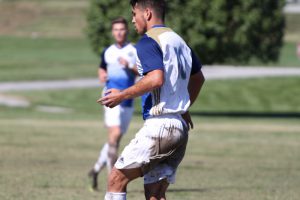