The East Central College Falcons, now 4-1 on the season, opened up the scoring early and often against the Missouri Baptist JV Spartans with an 8-1 victory. The Falcons were paced up front with multiple goal scorers Jacob Moore, who netted three and Umoh Ufot registering two.  Magnus Andersen connected on the first goal and assisted the game winner with a dish to Jacob Moore. The team’s two Brians rounded out the scoring as Brian Zapata and Brian Carbraley netted one each. In the nets, the Falcons held the Spartans to one tally as Connor Bandre and Moises Aldana shared time between the pipes. Kai Bucceiro and Christian Clardy-Lopez were also able make their mark on the score sheet with their first assists of the season. 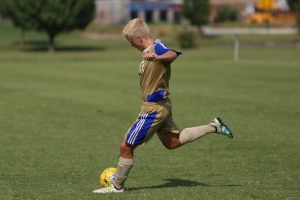