The 2018 ECC soccer season started off with a victory as the Falcons were in command of the entire match defeating Missouri Baptist JV 6-2 in St. Louis, MO. The Falcons outshot the Spartans 14-2 and missed a few other scoring opportunities. Joel Konteh and Gabriel Pires both notched two goals in the victory, while Leonard Sowa had three assists in the match. Randy Spence and Gary Dunne also netted a goal each.

ECC started out quickly as Gabriel Pires found the back of the net five minutes into the game as he was fed a pass from Arman Kovac. Then the Falcons experienced one of their two defensive breakdowns as they let the Missouri Baptist attacker go and tie the score in the sixth minute. After the breakdown the Falcons took control of the match elevating the score to 3-1 and then they didn’t look back conquering the Spartans 6-2 in the end. 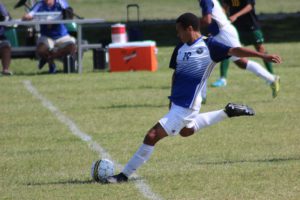