The 9-3-1 East Central College Falcons were able to take the Illinois Central College Cougars to the limit as they drew 2-2 over the weekend in East Peoria, IL. The previous week the Cougars were ranked in the NJCAA Top Twenty and are still receiving votes. ECC found themselves down in the first half 1-0 until Brian Cabraley connected on a rocket shot for the equalizer. The Falcons were down again  2-1 in the second half and then started knocking on the door with a barrage of shots. Umoh Ufot found the back of the net with his 15th goal of the season on a head ball assist from Zach Druhe. Jacon Moore had another opportunity, but was brought down in the box with a hard tackle and a no call from the referee. The game ended shortly after as the attempts just didn’t bring home the winner for the Falcons. 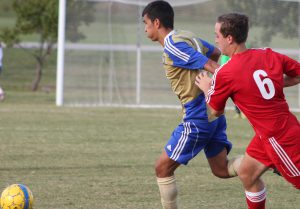