The Falcons (1-2-1) were able to find the net and a positive end result with a 3-2 victory over Southwestern Illinois College. As the game started, the Falcons were dictating the play to the Blue Storm and it showed 15 minutes into the game as the ECC attack was awarded a penalty kick. Guy Baskerville converted the attempt to elevate the Falcons to a 1-0 lead. As the game continued a confidence was instilled in the ECC players after Leo Sowa converted a direct free kick from 23 yards from goal by bending it around the wall and past the SWIC goalkeeper.

A third goal was added when Stephen Akot notched his first goal of the season on a good pass from Blake Little. Right before half time, ECC was cruising. It looked like the second half would go the Falcons way as well. Soon into the second half, ECC had a couple of breakaway chances come up short. Then the heat and injuries took their toll. SWIC answered midway through the second half to make it 3-1 and with about three minutes left scored again to make it 3-2. Flavio Santi had a couple big saves in the end of the match to preserve the victory for the Falcons. 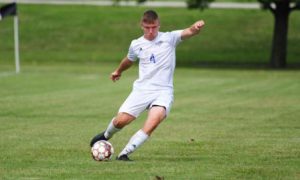