East Central College (7-5-3) found the right time to start playing their best soccer of the season as they flew past the State Fair Community College Roadrunners in the first round of the NJCAA Region 16 Tournament. A 2-0 victory was a statement from start to finish as the Falcons used every ounce of energy to finish the game off in regulation.

The Falcons were winning balls in the midfield and kept the attack in the State Fair end of the field for a majority of the first half. A strike from about 14 yards out from Arman Kovac opened the scoring in the 22nd minute on an assist from Stephen Akot. The Falcons went into half time with the 1-0 lead and were hungry for more goals.

A quick attack on the center off saw Leo Sowa knife through the Roadrunner defense beating two players and hitting a rocket shot 15 seconds into the 2nd half. It was Sowa’s sixth on the season and one of his most important goals as a Falcon. ECC was then able to control play as State Fair was rushing to play balls throughout the second half.

The defense held for another 44 minutes led by Flavio Santi in goal collecting his second shutout of State Fair in the past two weeks. Liam Durran, Guy Baskerville, Tanner Graef and Gabriel Pires had excellent games on defense.

Next up for the Falcons is Crowder College on Tuesday, Oct. 29 at 2:00PM in the Region 16 semifinal match. 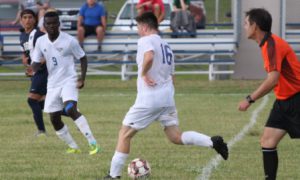