The Falcons (3-1) spent 43 minutes of the first half down 1-0 after giving up an early goal in the 1st minute to the St. Charles Community College Cougars in an NJCAA Region 16 and MCCAC match-up at the St. Louis Soccer Park in Fenton, MO. ECC scored an equalizer with 1-minute left in the first half as Joe McInnes was able to navigate through traffic in the Cougar penalty box to tuck in a goal in bottom right hand corner of the net.

The Falcons had an up and down match as they dominated possession in the first half working for the first goal. Then ECC was outplayed for about 25 minutes of the second half until Miguel Gonzalez struck a hard shot from about 20 yards out to give the Falcons the lead. The Falcons then put in some more fire power in the line up and had numerous scoring chances as Joe McInnes, Stephen Akot, Blake Little and Miguel Gonzalez had shots on goal stopped by the St. Charles CC goalkeeper. Gonzalez’s goal was the eventual game winner for a 2-1 final and his 3rd of the season. 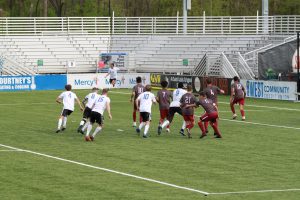