An end to the season was not what the Falcons (10-5-1) were planning as they headed into the Region 16 Semifinal game against St. Louis Community College. East Central College struck first scoring 30 seconds into the match with head ball goal by Archibald Darko-Boateng from a Jacob Moore assist. The Falcons played well in the match, but couldn’t keep the Archers from scoring on their few scoring attempts allowed. A 2-1 halftime deficit had the Falcons fired up as they outplayed St. Louis in the second half, but allowed two goals on two free kicks. One shot from 25 yards out and the other a penalty kick to end the game 4-1.

The season totals marked the 17th season with a .500 or better record for the East Central College soccer program. Post season honors will be finalized later in November after the conclusion of the NJCAA National Tournament as the Falcons are expected to bring home honors and the sophomores get a number of offers from four year university programs. 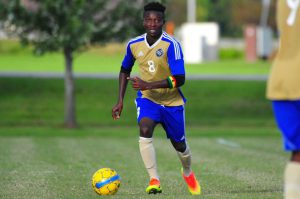