ECC Volleyball (7-4) had the match in control from start to finish as the Falcons floated past the Rend Lake Community College Warriors in straight sets by scores of 25-14, 25-22, 25-18. As the Falcons face competition throughout the regular season, it important to build on each win to create a mentality to finish off opposing teams in dominating fashion. The Falcons did just that last night against an NJCAA Region 24 opponent on the road. The kills came from a number of Falcons, Mariah Vahlkamp had eight, Jessi Kelly had seven, Symantha Fredrick and Sarah Weiland had six each and Abbie Dennignmann and Samantha Staab joined the hit parade with five a piece. Nicole Roper and Janice Steacy were the two providing the help with assists as they had 15 and 12 respectively.

ECC was paced defensively Kaley Roper who collected 29 digs to lead all Falcons. Vahlkamp had 24 digs as well in the match. The Falcons will face Missouri Baptist JV in an away match this Wednesday with hopes to improve their overall record in the first of a series of match ups this fall with the Spartans. 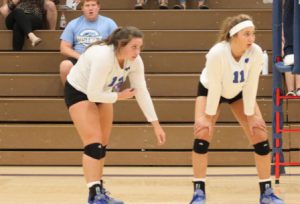