Volleyball Falcons improved to 13-9 on the season with a victory over the Rend Lake College Warriors in the second match of the day. After disposing of Missouri Baptist University in the first match, ECC regrouped and went back to work taking down Rend Lake in straight sets by scores 25-18, 25-21, 25-15. As the Falcons built up their attack, the offensive started clicking as McKenzie Struckhoff had ten kills and Cameron Hackmann added eight kills. Hackmann nailed a couple of cross court shots that were unstoppable for the Warrior defense. Another sophomore Emma Borcherding was swinging hard as well and collected six kills. Janice Steacy had a good match setting for the Falcons as she collected 46 assists. The team defensive proved to play well again in the match with a solid contribution from Grace Goedde in the libero position. 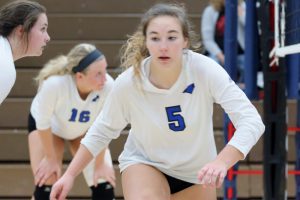