Active bats had East Central Softball sending shots to and over the fence against the Central Methodist University JV Eagles in a double header sweep at home. The score lines in the two games were indicative of the Falcons’ hot bats with 9-2 and 18-2 victories coming from hits throughout the lineup.

Offensively, Jena Monehan had her best single game as a Falcon going 3 for 4 with two, 3-run homers in the 18-2 win. Monehan collected 8 total RBI during the second game. Another accumulator of big statistics came from Kaylynn McKee who added a home run and amassed five RBI in the second game along with a home run. Dani Kimminau added to the home run parade as she was able to collect her first college home run with a solo shot in the third inning.

The pitching for the Falcons was a combined effort from Madelyn Webb and Maya Street in the first game with 4 and 5 strikeouts respectively coming from the duo. Sierra Voiles went the distance in the second game only allowing two runs in five innings pitched. 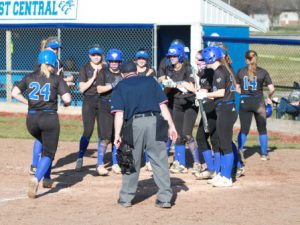