Falcons “Jam the Gym” Against Archers

A large crowd enjoyed a Falcon victory at “Jam the Gym” night as ECC put up a three set sweep of the St. Louis Community College Archers. ECC won the match by scores of 25-21, 25-14 and 27-25. A close score line had the ECC Falcons clawing to stay ahead in each set. The team faltered in the later stages of the third set, but showed determination to end the match with a comeback after trailing 23-22. The defense was led by McKenzie Struckhoff, who rattled off 23 digs, followed by Grace Goedde with 18 digs. Cameron Hackmann led the attack with 8 kills. The assist department was shared by two setters, Janice Steacy and Natalie Green with 15 and 11 helpers respectively.

The home victory put ECC at a 14-9 record for the season as the last home matches of the season are coming this weekend. The Falcons will face the Cottey College Comets and Northeastern Oklahoma A & M Norse on Friday and Saturday of this weekend. The Northeastern Oklahoma game will be “Sophomore Day” as the Falcons honor the four sophomores on the squad. 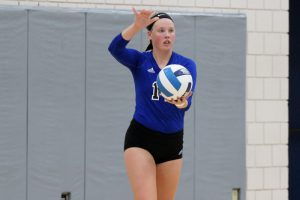