It is a new academic year, new coach, many new team members and definitely a new look to sports in 2020 for the East Central College Falcons. Coach Martin Clayes has the ECC Soccer team playing in uncharted territory as this is the first fall without regular season NJCAA soccer. The Falcons made quick work of the Missouri Baptist University Spartans reserve squad in an exhibition match to win 3-1. This will be one of only two exhibition games this fall for East Central College. The next match will be against Mineral Area College on Oct. 10 on the newly renovated ECC soccer pitch.

The Falcons struck midway through the first half as Miguel Gonzalez tucked in a loose ball from a free kick to give East Central College a 1-0 lead. MBU had some chances thwarted by a stingy defense with Guy Baskerville, sophomore defender, clearing a hard struck ball off of the goal line. Freshman goalkeeper Bailey Hoehne kept a clean sheet through the first 45 minutes as he was tested and made a big save on a well placed free kick.  Late in the first half, freshman Joe McInnes received a pass on an angle at the top of the box, then made a nice move to beat a defender and placed the ball in the back of the net to lift ECC to a 2-0 lead.

Coach Clayes made a wholesale change with playing an entirely different second half squad. They answered fairly quickly with a nice slot pass to Blake Little who knifed his way past a defender and tucked away a low shot past a charging MBU goalkeeper to put ECC up 3-0. The MBU squad started to put pressure on the ECC defense after the the third goal and Pierocarlo Previte came up with some big saves in the net for the Falcons in the second half . The Spartans added a late goal in the match as they challenged the Falcons throughout most of the second half.

As collegiate sports slowly return to normal, it is a good to have student athletes back on campus and playing their respective sports. 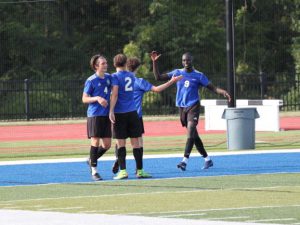 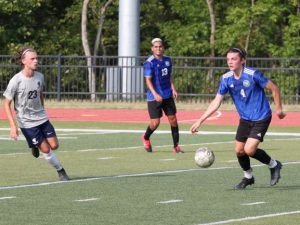 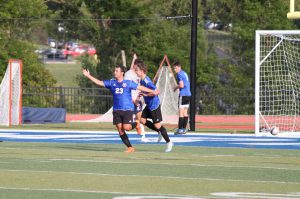