The Falcons (3-1) were able to jump on the Lindenwood University-Belleville JV Bobcats with quick strikes and didn’t look back throughout the entire match cruising to a 7-0 victory. The scoring started as the Falcons drew a penalty kick and sophomore midfielder Joel Konteh converted the kick. Freshman Leonard Sowa added the next one on a helper from Arman Kovac to make the score 2-0 at half time.

The second half opened when Konteh added his second on another free kick 30 yards from goal. Then freshman, Arman Kovac took over and scored three goals in a row for the Falcons. Two of the goals were scored on breakaways with another coming from the outside as he beat the defender to set up a shot to beat the keeper. The final goal was scored by Tanner Harris on an assist from Ricardo Pacheco. Gregorio Gros Jacques recorded the shutout for the Falcons who only allowed five shots in the match. 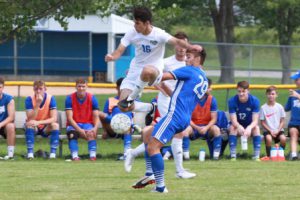