A sun-soaked afternoon was on tap for the annual East Central College “Stuff the Stands” event and two victories for ECC made the day extra special. The Falcons started off slow in the first game of the double header against St. Charles Community College, but rallied to erase a quick Cougar lead in the first inning by scoring three runs in the bottom of the second inning. The Falcons were paced offensively by three RBI from Meg Barger on two hits. Mallory Feldewerth added two RBI of her own in the victory. Another good offensive day came from Katie Gaus who contributed to the offense. Maya Street pitched well recording 9 strikeouts and allowing only 4 runs.

The second game had the Falcon’s bats heating up even more as East Central took a quick 3-0 lead. Despite the defense faltering early to let SCC get two runs in the second inning, the Falcons started crushing the ball. They added three runs in the bottom of the second inning and six runs in the bottom of the third inning to stretch the lead and finally win the game 13-2. Marissa Boyd and Jamie Kluba homered and Mallory Feldewerth had three doubles in the second victory. Madeline Webb kept the runs down as she pitched all seven innings to notch her second win of the season. 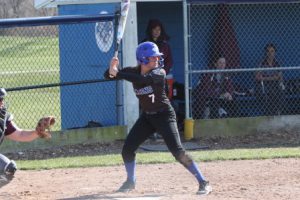 Meg Barger at the Plate