FALCONS PUT LOGGERS THROUGH A BUZZSAW

A beautiful fall afternoon set the tone for the East Central College Falcons (9-3) to extend their winning streak to four straight with a 7-3 victory over the Lincolnland Community College Loggers. The Falcons wasted no time in finding the back of the net as Jacob Moore scored his 15th goal of season two minutes into the game. Moore also netted a second goal and had two assists. Archibald Darko-Boateng added the next two goals with quick strikes on the Moore assists. The Falcons looked to be in control with a 4-0 lead at half. A sloppy second half had Lincoln land penetrating to score three times. Magnus Anderson added a goal and an assist while Brian Cabraley had two goals of his own to finally put the game out of reach for the opposition. 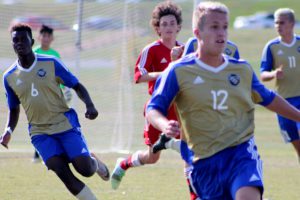