The Falcons (6-5-1) were able to ride the roaring winds of a coming storm to victory in a double header sweep of the Lewis & Clark Trailblazers by scores of 11-6 and 8-7. The first game started off in favor of the Trailblazers as LCCC jumped out to a 2-0 lead in the top of the second inning. The Falcons quickly changed their fortunes with a 2 RBI double in the bottom of the second by Kelly Ferguson to tie the game at 2-2. Then Danielle Kimminau and Lilly Prichard collected RBI to elevate the score to 4-2. ECC’s smallest in stature, but biggest threat at the plate, Maddie Greco,  answered with her fifth home run of the season driving in two runs to make the score 6-2.  The ECC defense wasn’t doing the team any favors in the top of the third inning as the bases were juiced and an LCCC player rocked a grand slam to tie the score at 6-6. A slightly flustered Falcon squad rallied behind another Greco home run and scored five more in the later innings to eventually win 11-6. Haley Schulte got the win from the circle throwing for the Falcons.

The second game had a similar start, but an even larger deficit as the Falcons found themselves trailing 6-0 after three innings. ECC finally started to make a run after the fifth inning. Nikki Abbott crushed a ball for a two RBI double to get ECC in reach at 6-5. Then Ashleigh Damazyn did some damage of her own as she launched the game winning three-run dinger to elevate the score to 8-6 in the bottom of the 6th as well. The Trailblazers answered with one more run, but the Falcons hung on in the top of the seventh to collect the win, behind a combined pitching effort from Eva Dawson and Addie Konkel. 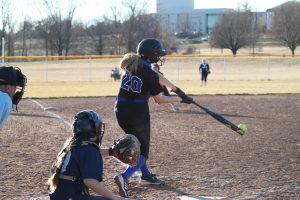