The East Central College Falcons, 2-0, were able to collect their first Region 16 and MCCAC Conference win of the season against the State Fair Community College Roadrunners by a score line of 3-2. It wasn’t easy for the Falcons as the heat index of 98 degrees played a big factor in the game.  ECC dominated the first half with 7 corner kicks, but came out with 1-1 score. Umoh Ufot put in the first goal for the Falcons for his 5th goal of the season on a cross by Archibald Darko-Boateng.

In the second half, the heat started to get to the Falcons, but they were able to persevere to the end. Jacob Moore received a pass from Umoh Ufot to put ECC up 2-1 in the second half. State Fair answered back quickly with a goal of their own to make it 2-2. The game clock started winding down to the end when Magnus Anderson played a short pass to Brian Cabraley who buried a shot from 25 yards out to seal the victory with four minutes remaining. 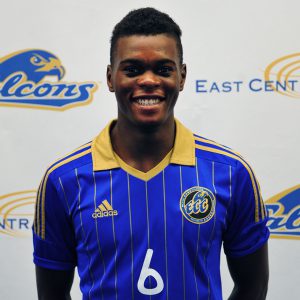