The biggest victory of the 2022 season to date had the East Central College Falcons (7-9-1) beating the NJCAA DII #18 ranked St. Charles Community College Cougars in a 4-3 overtime thriller for an region tournament semifinal winner. The game was played in cold, wet conditions but on turf allowing the game to be played through the rain.

The Falcons started the goal filled game in the 20th minute when Miguel Gonzalez took a cross out of the air and volleyed in a shot from about 30 feet from goal. ECC was winning 50/50 balls and putting their shots on frame at a better rate than they had all season. Gonzalez had another good chance to score stopped shortly after his first goal as the St. Charles goalkeeper made a great save on a point blank shot.

St. Charles quickly answered back with a goal of their own to tie the game 1-1. Still in the first half, an own goal by ECC on a corner kick put the Cougars up 2-1. Right before half, the Falcons came back with their own answer as Nelson Pena banged in a far side pass across the SCC penalty box to knot the score up at 2-2.

The second half started with more good play out of the Falcons as they held the Cougars at bay with some stellar saves by ECC keeper Mario Vaca Pereira. Then Pereira decided to add to the offense, which rarely happens for a goalkeeper to get an assist. A strong punt put Jay Yule in the box with a bouncing ball and he redirected it to beat the St. Charles keeper to put the Falcons up 3-2.

As the game neared the regulation end, St. Charles scored with 10 minutes left on a volley shot beating Pereira to tie the game at 3-3. The game then went to into overtime. As the overtime began, East Central and St. Charles traded one good chance each to score.

ECC scored the golden goal victory with Pereira atoning for the last goal against him with yet a second assist on a punt. He put Mitchell Foley into open space on a deep long driving punt and Foley answered the call for the overtime golden goal winner. 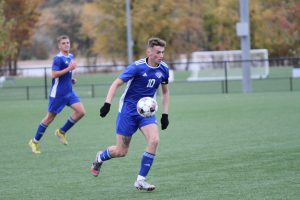 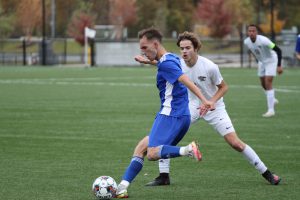 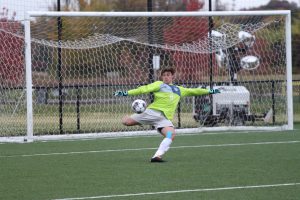 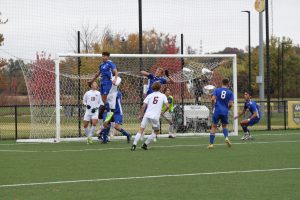 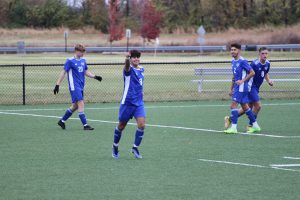 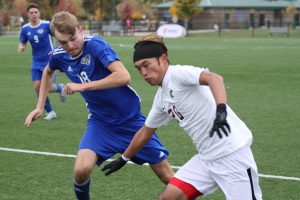