The Falcons 11-5-1 started the match against the Maple Woods Monarchs without much intensity. The Monarchs began the scoring with a penalty kick conversion in the last minutes of the first half to make the score 1-0. ECC came out of the half time with an amped up version of their game. After hitting the crossbar twice the goals started to come. Juan Bolivar netted two quick goals in the 52nd and 60th minutes for the equalizer and eventual game winner. The first was a chip over the keeper and the other one was tucked in from an across the box pass from Ralph Joseph. The Falcons poured on the offense and Billy Thompson netted his fifth goal of the season on a nice cut into the box to beat the defender and place the ball into the far corner of the net.

The Falcons weren’t under much duress defensively, but Moises Aldana had to make one huge save to keep the game close at 3-1. After the chance from the Monarchs, the Falcons penetrated twice into the box drawing penalty kicks. Zach Druhe buried the first and Rudy Gonzalez finessed in the second to make the final score 5-1. This secured the #3 seed in the NJCAA Region 16 Tournament for East Central College. 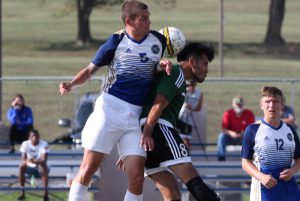