East Central College signed another softball recruit as Kelly’s Alyssa Tidwell inked her National Letter of Intent to continue her collegiate softball career with the Falcons.

Tidwell was a pitcher and first baseman for Kelly High School over her four-year career and picked up many accolades during her time.

During Tidwell’s high school tenure, she was named to the All-Region and All-District Teams three times each. She was also named to the All-Conference team twice and was all All-State 2nd-Teamer in 2017.

From the circle, Tidwell finished with a career ERA of 2.37. She also had an impressive 46-17 record, in 70 games pitched. During her high school playing days she gave up only 91 walks — nearly one walk per appearance.

Tidwell will join a fellow high school teammate on Falcons’ roster, as Alyssa Moore enters her freshman season in 2019. 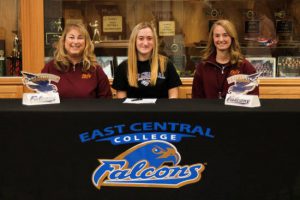