The ECC Falcons, now 18-18 on the season, were able to hit their way to victory over the Missouri Valley JV Vikings by scores of 11-3 and 11-0 on Sunday. A much needed offensive surge had ECC hitting the ball well. Marissa Boyd led the charge in the first game by going 3 for 5 with two doubles and three RBI. Seeley Friend and Megan Micke both collected two hits and two RBI as well. Ashley Miller recorded the win for the Falcons pitching, as she only allowed 5 hits and two earned runs. She struck out three in the first game of the double header.

The second game of the day had ECC in command after the second inning, when the Falcons put up double digits to lead the game 10 -0. Kori Fiedler went 2 for 2 with four RBI to pace ECC in the offensive categories. Sam White and Marissa Boyd added two hits each in the victory as well. The goose egg in the opposition’s score line was provided through an error free game and the pitching of Abby Ray. Ray registered three strikeouts in the shutout victory for the Falcons. 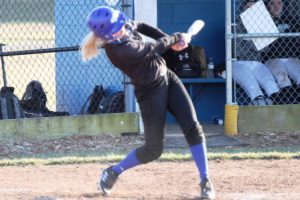 Marissa Boyd at the Plate