A productive day at the plate and good pitching allowed the Falcons to fly past the Mineral Area Cardinals in the first game of a double header by a score of 4-0. Maya Street’s pitching led the Falcons to the shutout victory by only letting the opposition get two hits in the game as she struck out four batters. On the offensive side, Lauren Grunwaldt went 3 for 3 with two singles and a double. Katie Gaus, Marissa Boyd and Mallory Feldewerth tagged the MAC starting pitcher for two hits each to contribute to the Falcons’ 4-0 win.

The second game was going well for the Falcons as they were leading 3-0 after the first inning. A tough play in the outfield changed the game as Meg Barger collided hard with the fence trying to field a deep fly to center. Two runs scored and then the game was tied 3-3. The Falcons then trailed 7-3 after the top of the sixth inning. ECC rallied in bottom of the seventh, but came up short 7-6 after scoring three runs in the attempt of a comeback. 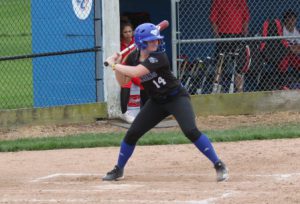