A tough first game led to a double header split for the Falcons (10-16) against the North Arkansas Pioneers. After a 21-4 loss, the Falcons rallied in the second game to register an 11-3 win behind the pitching of Mackenzie Altenthal. She recorded one of her best pitching performances of the season with 6 strikeouts as the Falcons returned the favor to the North Arkansas ending the game after five innings. On the offensive side, the Falcons were lifted up by Alyssa Moore who collected two doubles with along with two RBI. Lauren Grunwaldt had two hits and drove in two runs herself. Mallory Feldewerth and Marissa Boyd had good offensive production in the victory as well.

The Falcons will hope to add more to the win column today as they face the St. Charles Community College Cougars in an away double header. Earlier in the season, the Falcons swept St. Charles at home. 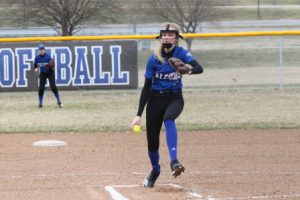