East Central College (8-3) was able to take down Harris Stowe State University with 4-0 scoreline. Moises Aldana recorded the shutout for the Falcons as the defense was helpful in protecting the clean sheet. On the other end of the pitch, ECC was able to strike the back of the net as Joel Konteh connected on a headball cross from Nick Tosovsky-Heinemeier. Konteh also scored a second goal on a laser shot to the upper ninety beating the HSSU goalkeeper. Braydon Roberts notched his first goal of the season with a nice finish. Amiru N’Diaye placed a nice slot ball through to Billy Thompson for the fourth and final goal on the afternoon. Coach Grimes was pleased with the turn around after the Falcons dropped their last two matches to end their losing streak. 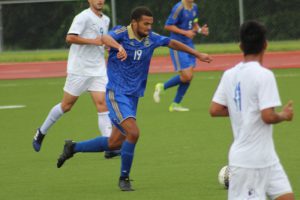