A warm, blustery February day enabled East Central College to get their season opening, double header in the books with an exclamation point! The Falcons swept the double header by scores of 8-0 and 9-1 over the Missouri Valley College JV Vikings. ECC was slow to get the bats started in the first game leading 1-0 going into the top of the 4th inning. Then the bats came alive with back to back to back doubles by Alayna Abney, Meg Barger and Jensen Crenshaw to score two runs elevating the score to 3-0. As the game progressed in the 5th inning, Taylor Ruth had a 2 RBI triple to boost the score to 5-0. The team didn’t take their foot off the accelerator in the 6th inning to end it early with an 8-0 score when they put pressure and forced walks and errors from the opposition. Ashley Miller notched the shutout victory from the circle with good defensive help.

The second game on the slate started slow as well. ECC was up 1-0 in the second inning on a Marissa Boyd hit turned into a round tripper on errors. The Falcons then gave up the lone opposing run on the day with a solo home run by Missouri Valley. ECC then took advantage of errors and started scoring in bunches. Kori Fiedler scored on an overthrow and Sam White came into a tough play at the plate and scored after a hard collision. The second game ended early when Marissa Boyd sent a three run shot over the fence for her first collegiate home run for a 9-1 victory.  Abby Ray completed the pitching duties only giving up two hits. 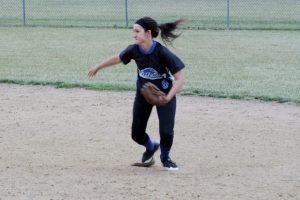 Alayna Abney at 2nd Base