The Falcons (6-0) swept Lewis & Clark Community College in a double header, but had to claw their way back to win the first game to take down the Trailblazers 7-5. ECC was trailing 2-0 and then the game got interesting as the Falcons tied it up 2-2. They fell behind again 5-2 in the 5th inning. The Falcons rallied with two RBI hits from Samantha White in the bottom of the 5th. Makala Schumann, Jamie Kluba, Ashley Miller added RBI hits to tie the score at 5-5. The sixth inning had the Falcons poised to take over as Jensen Crenshaw started off the hitting with a double. Monica Kelley brought Crenshaw home and scored the final run as well to make the game a 7-5 final. Abby Ray was come into the game as a reliever to get the win.

The second game was close, but Falcons were only down 1-0 before they took control of the game. Jamie Kluba hit a two run homer as did Jordan Vrba. Monica Kelley, Sam White, Megan Micke and Jensen Crenshaw collected the other RBI in the 9-6 win. Makayla Trail was credited with the win and Abby Ray got the save. A total team effort helped the Falcons win despite some fielding errors. 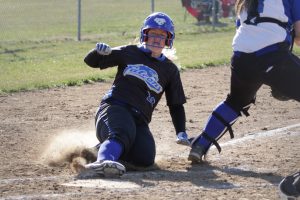