The Falcons (6-2) have been able to find a winning formula this week with goals coming from players across the line-up. ECC knocked down the Central Methodist JV Eagles 2-0 in an away match. The defense held the opposition to four shots on goal and Gregorio Gros Jacques came up big in the nets with four stops to record the shutout. Ricardo Pacheco netted the eventual game winner on a cross from Flavian Hunter. Pacheco buried the ball into the upper corner to start ECC off on the right track. The second goal came when Joel Konteh switched fields with the ball and put it on Juan Bolivar’s foot. Bolivar beat the last defender and tucked in the insurance goal for the Falcons.

The next match for ECC will be against NJCAA Region 16 opponent Crowder College at home this Sunday. The Roughriders come into the match with a near .500 record and will be a tough opponent. 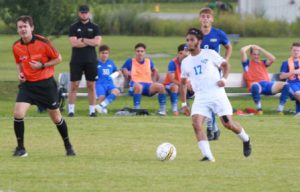