Falcons Come Home to Roost in Tri-Match and Win Two

The ECC Volleyball Falcons (8-1) were off for 10 days straight and needed a little time to knock of the dust off and get down to business in their home tri-match against Missouri Baptist University JV and Independence Community College.

ECC needed 4 sets to take down the Spartans by a score line of 25-16, 25-16, 23-25, 25-17. Some of the regular offensive threats in the Falcon line-up were quiet in the first three sets, but then the swings started to touch down in the Spartans back court. Macey Morehead, Teena Lutui, Makayla Case and Leinata Leakehe found some holes in the opposition’s defense and started pounding the ball in the back court.

Facing Independence CC in the second match had a score line of 25-13, 21-25 , 25-11, 25-15  and ECC took control after the second set. Team play got better defensively in the 3rd and 4th sets. The team had some mistakes and defensive coverage that was rectified by Coach Lisa Mathes-Peters in between sets. A solid finish was a total team effort in the last sets led by Trinity Clark as the libero position. 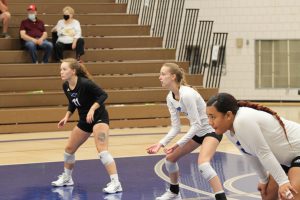