The Falcons (0-0-1) came out to play despite the heat and played well the first 65 minutes against Indian Hills in an interstate match up. The Falcons struck first as Stephen Akot buried his first goal of the year on assist from Joe McInnes in the 48th minute. ECC didn’t waste time and struck again in the 55th minute to go up 2-0 on a goal by Miguel Gonzalez.

As time went on the heat and fitness were a big factor as players started to cramp up and very few were able to go the distance. Indian Hills struck in the 70th minute and then again in 81st to take the game into overtime. Both teams were running out of gas in the overtime and play started to slow in pace as the game ended in a 2-2 overtime tie.  Toby Lydon-Gardiner had made a few great saves to keep the Falcons in the match. Back line play by Julio Gonzalez, Jacob Sauvage, Chris Tadeo and James Baxter were a big factor in the match being close. 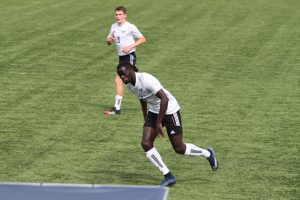