ECC Women’s Soccer (1-2) was able to get the first win of the season with a 2-0 victory over the John Wood Community College Blazers in an inter-region match up. The win was the first ever for the Falcons out of the state of Missouri since the team only played in Region 16 last year in their inaugural season.

The Falcons were able to find the net behind good overall play and build up in the front of the net. Sophomore Abby Layton netted her first goal of the young season to lift the Falcons to a 1-0 lead. Later in the match ECC struck again on a goal by Gretchen Overman. The team played well on defense led by the goal tending of Gabrielle Mattli who earned the shutout for her first college victory. Destiny Boehm and Sami Starling are using their sophomore experience to keep the opposition out of the backfield. 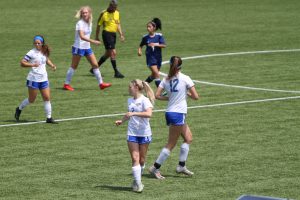