Falcons Win One in Double Header with Archers

A double header match-up between MCCAC and Region 16 rivals East Central College and St. Louis Community College ended up in a split with Falcons taking the first one 2-0 and the Archers the second 9-0. Hailey Schulte put together a gem of a performance from the circle and her team backed her up defensively in the first game. Schulte struck out 11 STLCC batters, walked one and only allowed six hits. Lilly Prichard added some offensive spark as she launched a solo home run going 2 for 2 in the first game. The first game saw Maddie Greco go 1 for 1 , but she reached base three times as she was hit twice by pitches.  Dani Kimminau had one run scored in the first game.

The second game wasn’t as favorable for the Falcons who fell 9-0 without much in the hit department.  Greco was counting her bruises from the first game and then got hit two more times on the day for a total of four hit by pitches to get on base. Kimminau was the only Falcon to hit in the second game as she recorded a double into the stat book. 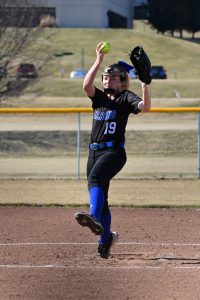