ECC Volleyball (4-2) was able to brave the frigid temperatures outside and inside the gym to win two matches in a Saturday afternoon tri-match with Lewis & Clark Community College and Missouri Baptist University JV. The Falcons won both matches in straight sets even though the first set in each match was closely contested.

The first match against Lewis Clark had a score line of 25-23, 25-16, 25-14 and the Falcons were flying as the match progressed. A formula for success seemed to work in the first match, so the same recipe was concocted up by the Falcons for the second match. ECC took down the MBU JV Spartans 25-23, 25-18, 25-16. It took some time to find the “go to” players , but Allison Tonioli, Grace Struttmann and Leinata Leakehe led the charge on the offensive side. Alyce Koch also recorded a nice day in the stat book as she collected crucial kills as the right time in the match.

Maranntha Holliman had a good day in the assist department setting up her teammates to move the Falcons back into the win column. Coach Mathes-Peters was pleased with the team’s overall play, but knows there is definitely room for improvement as the Falcons hit the toughest stretch of their season. 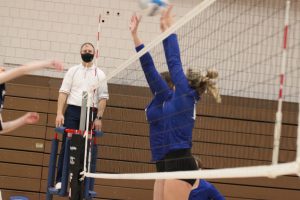